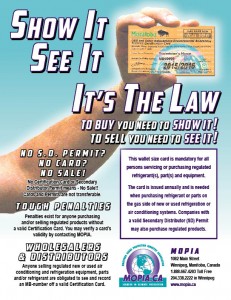 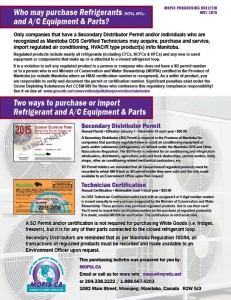 See the Environmental Code of Practice for the Elimination of Halocarbon Emissions from Refrigeration and Air Conditioning Systems at:

Next date is TBA. Watch for several new dates soon.

Those companies handling/purchasing/importing into the Province regulated parts and refrigerants will require a company Secondary Distributor Permit. The renewal or application form for you is here:

27th Meeting of the Parties (MOP)

The 25th MOP took place 21-25 October in Bangkok. MOPIA’s Chair and Executive Director were present to hear the latest and share information. You may also visit 2 portals to obtain supplemental information. See: 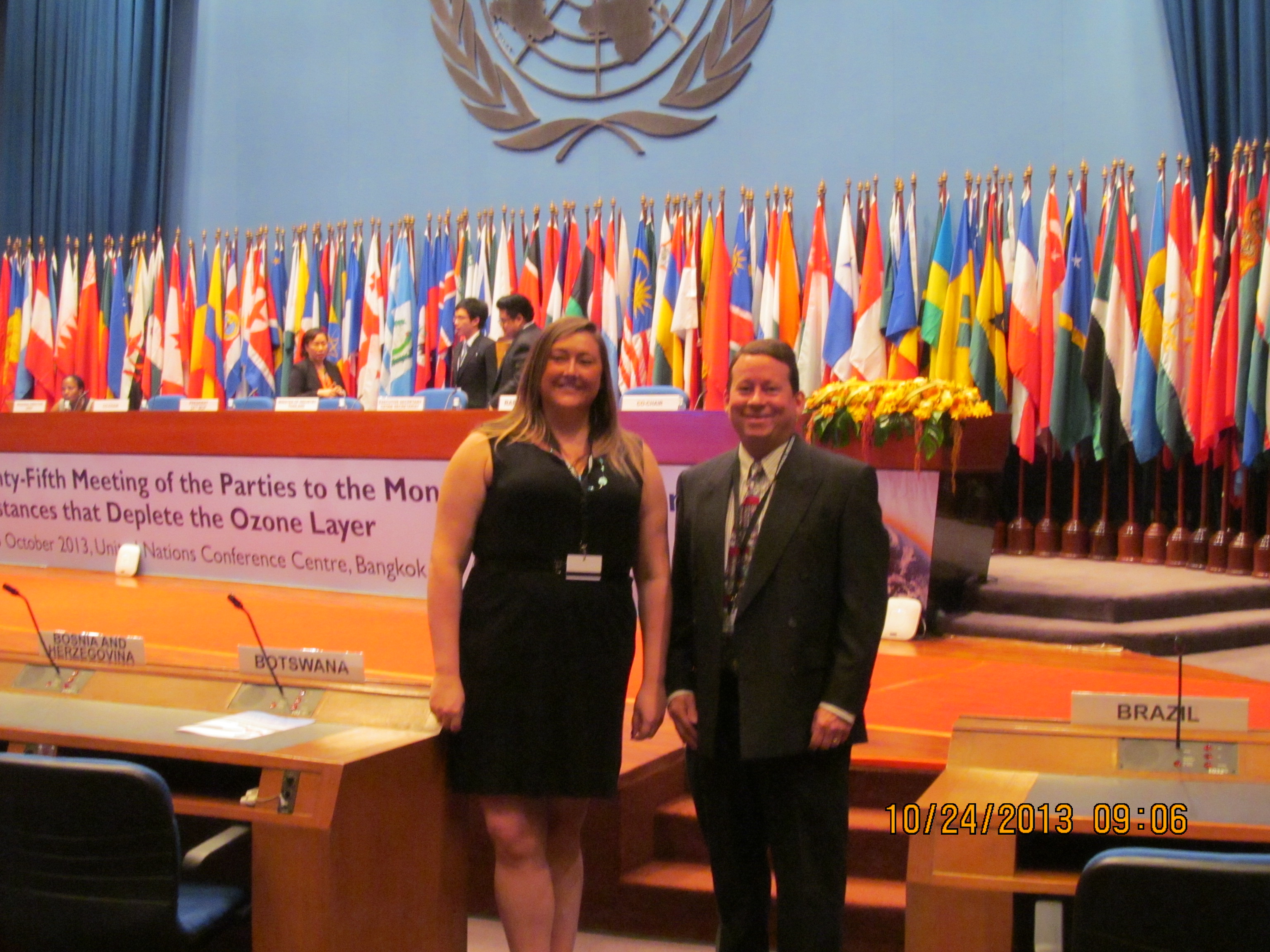 The Arctic & the Ozone Layer: Stabilizing our environment and climate. In 2011, extremely low ozone levels were recorded in the Arctic. 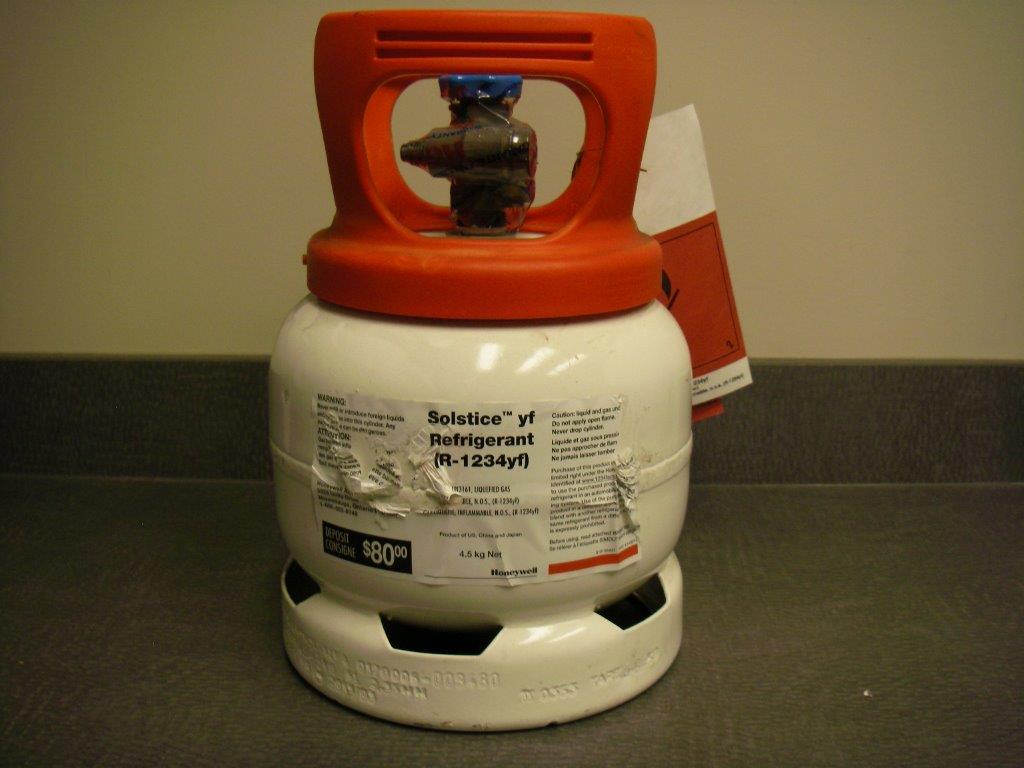 MOPIA has found that certain large auto dealerships are beginning to receive new 2014 vehicles with new refrigerant HFO 1234yf within their air conditioning systems (containing a refrigerant charge of 1.2 lbs). The refrigerant comes in cylinders of 4.5 kg, much less than the typical 30lb cylinder for previous refrigerants HFC 134a and HCFC 22, as the cost for HFO 1234yf retail is approximately $140/lb. We are told this new refrigerant requires a different recovery machine than that for HFC 134a or risk damage to the unit. HFO 1234yf is noted as flammable. 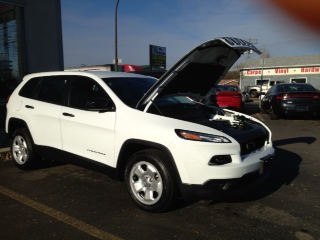 See the web replay at:

International Day for the Preservation of the Ozone Layer

Passing of a Champion

MOPIA regrets to announce the passing of our former Chair, Board member and current Secretary on the Executive Committee, Mr. Bill Taylor, on August 26 in Winnipeg. Bill has been a fixture within MOPIA since day one, for nearly 20 years. He was an invaluable source of knowledge and insight. We extend our condolences to his family. Bill is seen here (at left) at the 20th Montreal Protocol Meeting. 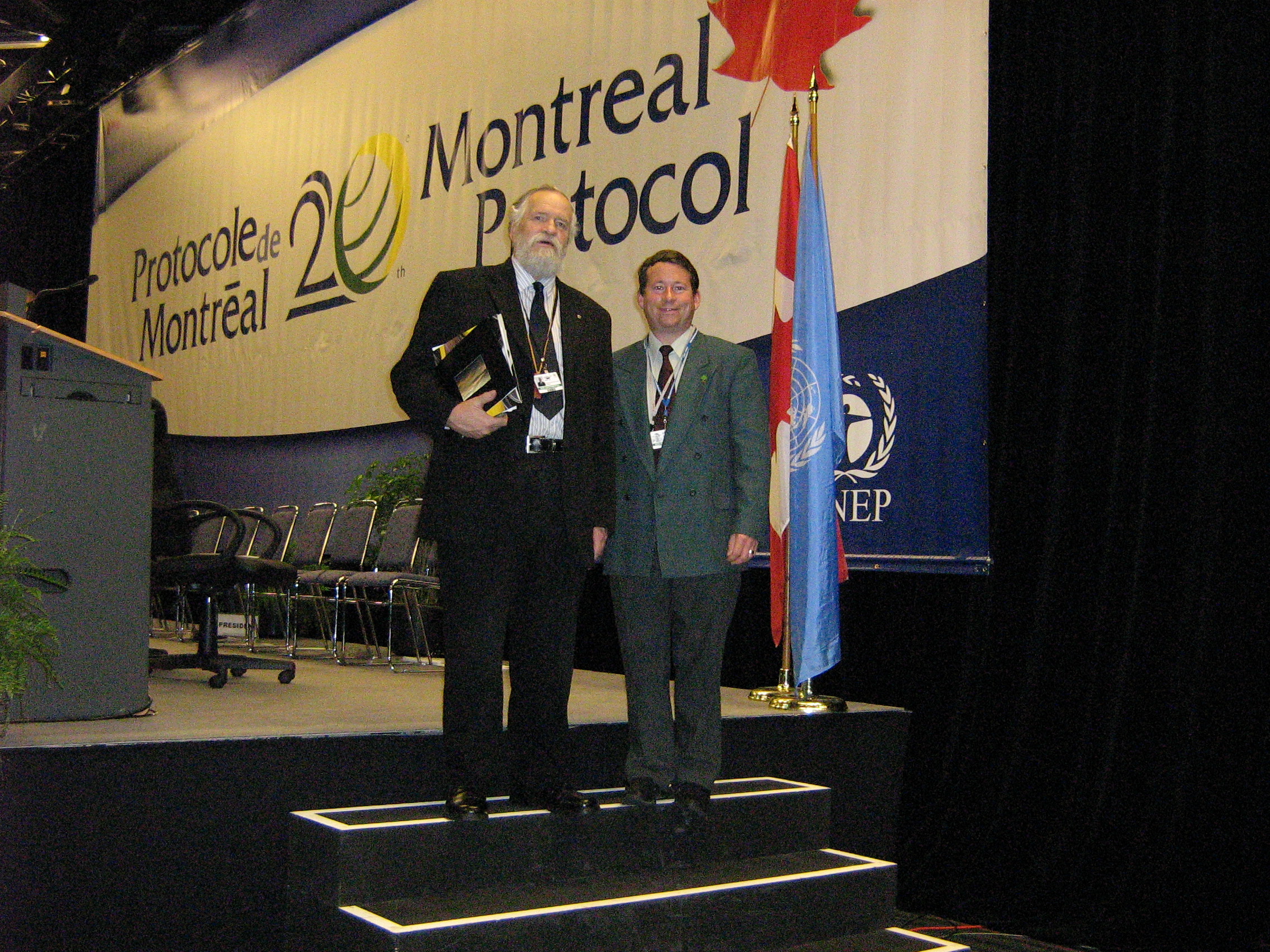 MOPIA recently released our 2013 edition of our Manitoba Compliance Guide targeted for those in the refrigeration and air conditioning sectors. You may view it below:

You are encouraged to attend one of several awareness sessions being held across Manitoba beginning in June. These events are free, include a complimentary meal and refreshments as well as about an hour of information including a chance to voice your suggestions or concerns. Pre-register by downloading the form below and returning it to MOPIA in advance.

So far, MOPIA has been to: Steinbach,  Morden/Winkler,  Portage la Prairie and Selkirk, Winnipeg, Dauphin and Brandon.

Our next sessions are being planned for Flin Flon, Thompson and The Pas (September 2013).

Addition locations may be added, where enough interest is identified.

At a meeting held in Winnipeg, MOPIA’s Board of Directors elected our Executive Committee Leadership Team (ExCom) for the 2015 period. See these appointments below:

MOPIA’s 19th AGM was held on Monday, April 22 in Winnipeg at a special venue, MACDON Industries. There were a few proposed Bylaw amendments adopted, these can be seen below.

Planning to Purchase Regulated Products….. Make Sure You Know……

Manitoba’s Ozone Depleting Substances and Other Halocarbons Regulation 103/94 restricts the sale and purchase of a variety of refrigerants and any new or used part(s) connected to the closed refrigerant loop.

In order to purchase any HCFC or HFC refrigerant and parts or equipment, you must be a Manitoba certified technician and/or hold a Secondary Distributor Permit. See our Bulletin below:

SD Who can Acquire-Purchasers Notice 2013

REPORT TO THE MMDA from MOPIA January 2013

This entry was posted in News. Bookmark the permalink.